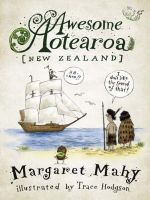 I have just finished reading Awesome Aotearoa : Margaret Mahy’s History of New Zealand and I wanted to write this review while it was still fresh in my mind.

This book took about 5 hours to read and it is 128 pages. Many pages are filled with illustrations from political satirist Trace Hodgson.

This book gives a general overview of the history of New Zealand. Margaret is a master story teller and she outlines her version of New Zealand history using lively language and simple explanations.

Even though it is written well, I must confess I did not like it at all.

She writes with a cynical and disrespectful tone and the illustrator is even worse.

To be more specific…

Under aged drinking and alcohol abuse is almost glorified.
On page 25 Young Nick is depicted drunk with a black eye and a bottle in his hand. Later in the book she also makes light of New Zealand drinking culture and the 6 O’clock swill. She mocks the advocates for keeping pub time restricted to 6pm as silly backward thinking individuals, when I am sure their motives were much nobler.

Missionaries are also treated with disrespect.
For example Samuel Marsden is often referred to in New Zealand history as ‘the Apostle of New Zealand’. She instead ignores that name and chooses to use the name flogging pastor (a name given to him by some Australians for his harsh punishment of convicts). The illustration that accompanies this story p.39 is even more upsetting. Samuel Marsden is depicted as trying to extract money from foolish looking white people with a sinister look. Behind his back he is holding a whip. This picture has nothing to do with the story—it simply illustrates contempt for the missionary work of this highly esteemed man.

Her attitude is sometimes flippant. On page 80 she mentions a train crash in the Boer war when 16 soldiers were killed. She says they “might have well stayed at home.”

On numerous occasions she takes the opportunity to have a little bash at Aussies, Poms, Yanks and the French. Whilst it may seem like friendly humour in person, in the book it has a nasty edge. Chapter 7 is titled French Cooking. She jokes about the tasty flesh the French must have had since they were such good cooks. The illustration on p.29 is of two Maori men eating, presumably, French sailors. The caption is, “Yum I love French cooking.”

Would I recommend Awesome Aotearoa?

Unfortunately this book will probably be used to teach children New Zealand history, for as far as I know, there is not another book that is a narrative style and reaches out to a young audience. But I think its cynical and satirical tone is better left for an adult audience, if at all.

After a little cyber searching I found that I’m not the only person who doesn’t like this book. Rob Holding, a Christian radio host, cancelled an interview with Margaret Mahy.

He says via email, “Unfortunately, the book is just a little too far over the tongue-in-cheek line, bordering on disrespectful in places. (The cartoons certainly don’t help in that area.)”

Margaret Mahy acknowledged that her religious views wouldn’t match up with the listeners of a Christian radio station.
Read the whole interview here…

For other New Zealand books for children see our booklist.